How is everyone? It has been a busy summer over here. It was nice to see everyone at the picnic this year.
Lots of things going on in my world - we're still working our way down to South Carolina, we had a bunch of things already planned throughout the summer and now I finally have a moment to plan a move. Mover estimates this coming week hopefully.
In the meantime, Kevin had his open heart surgery mid-August. The trigger was pulled quickly after a surgical consult - we had the consult on a Tuesday and the surgeon said "how's Friday?"!! We did wait until the following week, but it was a whirlwind. Kevin has bicuspid aortic valve that has been deteriorating and an ascending aortic aneurysm that has been getting larger. This was a situation we have been monitoring for the last 8 years, and we probably should have had the surgery last year, but I'm SUPER happy that it is over and done with. He was a stellar patient and has recovered in record time! My superman...I love him so much!
We've been down to our new house a few times, prepping things like wifi and working on a furniture plan and unpacking stuff we did bring down. Next time down for me should be the big move. Targeting mid-November, but since we're flexible I'm going to see what is convenient for the moving company.
I'm excited and nervous to move, I've never left WNY before, but timing is good and Lake Murray is beautiful. I think it will be good for the soul. The last 5 years of my life have been insane with enough major life changing events. I like to summarize it like this - I turned 40, my dad died the next week and left a 2-year clean up project of properties, I discovered I had BRCA1, which led to multiple surgeries, then we bought a house, Kevin had major open heart surgery, and now we are moving. Whew, I'm ready for a break (right after I get a mole checked out, haha).
I hope that SC is going to be that break, but it will take a while to settle in, unpack, maneuver through the house, keep up with my job, and do all those fun relocate things like changing address everywhere, find new doctors and get used to driving more for anything you want. We're about 20-25 minutes from town and about 45-55 minutes outside of Columbia, SC. I'm looking forward to the slow down and minimally the view of the lake!
Ok, well enough about me! I hope that you are all doing well and ready for Fall.
Yours,
Molly

This year's event was about 190 people. It was warm, but still a good turnout. I already packed away my notes and stuff!
See pictures: Pioneers Picnic 2022 Pictures
I'm not sure we'll be able to keep this up - we'll have to work on a plan for next year. Barnard/Forest Hill is fighting over a lease agreement, so we may need to consider other locations. Plus with my move to SC, this will be more difficult to manage, so we'll have to see how the new year rolls in.

People (aka the living!)

Please send me things to publish!

Molly,
As I had mentioned to you at the picnic, I would like to pass on the following.
One of our fellow co-workers is now a resident of The Landing, a nursing home in Brighton on Westfall Rd. just west of Winton Rd.
He is Anton "Jim" Richmond who worked in Electric Distribution Engineering involved with Joint facilities. I believe he retired in the late 1990's.
Many are probably unaware that Jim is a WW-2 veteran. He was raised in the Quaker Church in Pumpkin Hook, Town of Farmington.
Right after his 18th birthday he was drafted into the Army and as a Quaker sent to the Army Medic training school.
Following his training in late 1944 he was shipped to the Pacific and assigned to the 33rd Infantry Division who had been assigned the task of pushing the Japanese out of the Philippine Island of Luzon. Assigned as a combat medic he was wounded in early June 1945 and spent six months in hospitals recovering and being discharged after Japan's surrender in August 1945.
He is the recipient of the Bronze Star Medal and a Purple Heart.
Jim just celebrated his 96th birthday in May. He has a daughter in California and son in Canada.
I would like to encourage any of you who remember him to stop in, I know he would be happy to see you.
-Harry Standhart, Electric Distribution Engineering and T&D Lines.

See new tab on this page!
Posted by Miss Molly at 9:03 PM No comments:

Email ThisBlogThis!Share to TwitterShare to FacebookShare to Pinterest
Labels: Newsletter

Today brings thoughts of the Pioneer Picnic - details below. What a beautiful weather weekend we've had here. I'll be looking for voluteers for the future picnics - and if anyone wants to take it over, let me know! If not, I should still be able to manage most of it remotely because...
Kevin and I spent most of May down in South Carolina with the goal of house hunting - and we found one! A beautiful place down on Lake Murray (just west of Columbia, SC). Not sure when/how we'll be moving just yet, but the exciting transition is coming. We also both managed to pick up Covid down there, I think a friend brought it from Rochester when visiting and it catches on quicker these days. It was mostly a long weekend of a minor head cold, but I had this swimmy head feeling and headaches that seemed to continue for another week. Minor congestion still remains.
Warmest regards,
Molly

Please pay in advance by Friday, July 15th, 2022:
Make check out to “PIONEERS OF RG&E”
Please include names of attendees and Mail to:
Molly Johnston
51 Chautauqua Drive
Rochester, NY 14623
You do not need to reply if you are not attending
See you there!

Here are some things from Facebook - posted on the RG&E Pioneer's Club site. 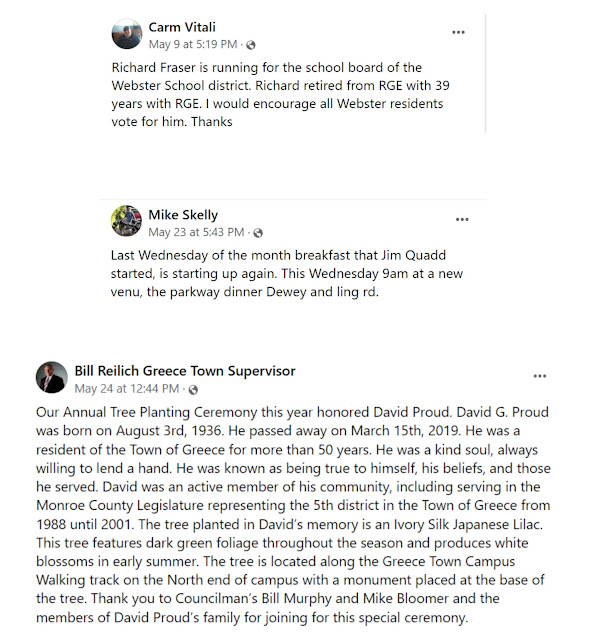 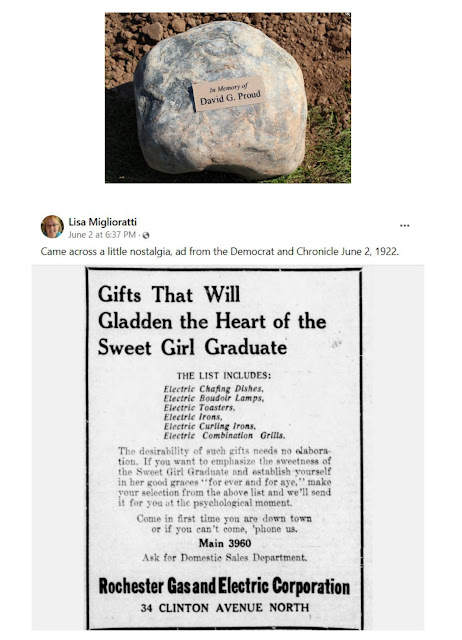 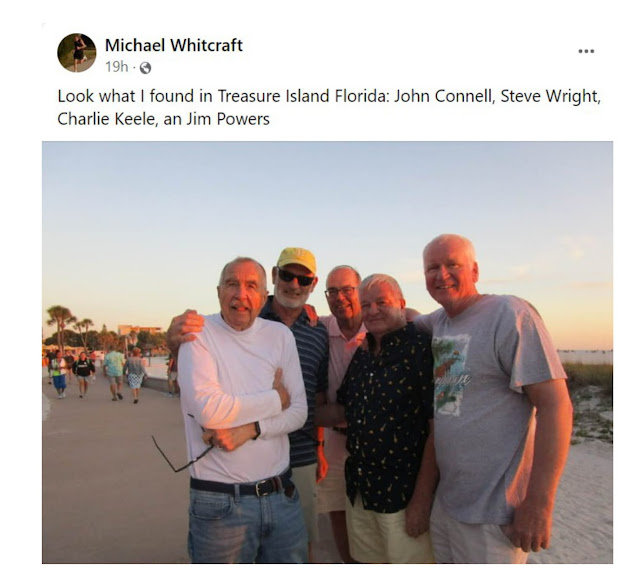 I know, pretty late for a Happy New Year, but hey, life gets busy I guess.
I expect that everyone is happy that things have opened up a bit more and are starting to somewhat feel back to normal again!
It has been a relatively quiet front on the newsletter side.
Warmest regards,
Molly

The Klein's report that the March Picnic was just them and another couple, so they likely won't be holding it again. Unfortunately, I didn't get a chance to send out a full email reminder this year, but I'm not sure it would have helped. The FL picnic has been dwindling for years I think.
I'll have to start digging into the August Pioneer Picnic soon. They warned me costs were probably going to be higher than we've seen in the past, so heads up.

From Heinz Kepplinger on 3/10/22.
This is a photo of Ed Hosmer, retired foreman from the RGE line dept. John Bliss and Heinz Kepplinger recently visited with him at his home in Matlacha, Florida. (2/28/2022).
We had a good visit with lots of stories and laughs. 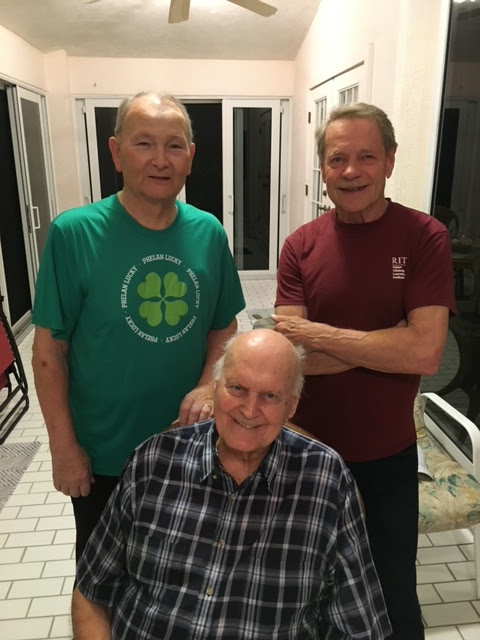 I don't know if you recall, but in August of 2020, I had stumbled across an obituary for Chuck Yatteau:
Charles "Chuck" Yatteau (this guy wasn't from RG&E, but because his obit mentions it in one of his "sayings", it is cute to read. Plus his description reminds me of you guys!)
This January 2022, his son Terry Yatteau found that post and reached out to me via email:

Hi Molly
Thanks for including my dad Chuck Yatteau in your Pioneers newsletter last year. It was unexpected AND funny. He would have gotten a kick out of it.
Little did your readers know that my dad's grandfather Frank Yatteau was an RG&E employee for 45 years  (1895-1940ish). His dad, George Washington Yattau was a veteran of the Civil War. Had his leg shot in ambush close to wars end. Amputee at the knee. Couldn't farm anymore so he opened a billiard parlor in Carthage, NY where he was from. Then moved the business to Rochester in 1870. I've always suspected that GW may have networked at his downtown billiard hall on behalf of his kid to land him the RG&E gig.
Frank and his wife Emma had 11 kids and 64 grandkids (my dad was one of them). Family home is on Sycamore St in Swillburg portion of the city near Pinnacle Hill.
Thanks again!
Terry Yatteau (pronounced "Yatto" if you're from Swillburg or work in the Local 13 or 86 Unions)

I asked him how he found the post and he said:

I was googling the family name w/other terms to see what would come up. Have used that method before to discover colorful family info. That's how I came across the newsletter.
Also, my grandfather Tom Yatteau (Local 13 Pipefitter) was working at Russel Station the day his 7th kid (of 8) was born. That's how my uncle Rusty got his name.
Attached is my great grandfather's obit from the Times Union.

Robert Hicks posted a scanned copy of the RG&E Story - you can download it or see it HERE.